GILBERT, Ariz. – Steve and Jodi Jacobson bought their Phoenix-area “dream home” in 2005. They built flagstone steps to the front door. They tiled the kitchen and bathroom. They entertained often, enjoying their mountain views. 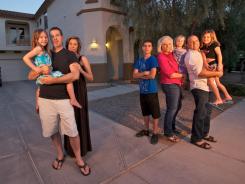 The Jacobsons, left — Jodi, Steve and Grace, 5 — are friends with the the Pierces — parents Jessica and Mark with Tanner, 13, Chloe, 5, and Carly, 3. Both families lost their homes to foreclosure and now rent in the same Gilbert, Ariz., subdivision.

The Jacobsons, left — Jodi, Steve and Grace, 5 — are friends with the the Pierces — parents Jessica and Mark with Tanner, 13, Chloe, 5, and Carly, 3. Both families lost their homes to foreclosure and now rent in the same Gilbert, Ariz., subdivision.

“We put our soul into that house,” says Steve Jacobson, 37.

Then, home prices tanked more than 50%. Steve, a software quality assurance engineer, suffered pay cuts. In 2010, foreclosure claimed the home and their $100,000 down payment.

The Jacobsons didn’t lose their desire to live in a single-family home, however. They now rent one, like many other former homeowners displaced by foreclosure.

But unlike traditional apartment renters, this breed of American tenants are older and have kids, U.S. Census Bureau data indicate. As they move from homes they owned to ones they rent, they’re changing neighborhoods for better and for worse. They’re fueling a land-rush as investors snap up homes, mostly in markets hard-hit by foreclosure, to rent to them. And their growth — in cities from Florida to California — has implications for home builders, school districts and companies that will jockey for the dollars they used to invest in homes, predict Wall Street analysts and demographic researchers.

The foreclosure crisis will drive 3 million former homeowners to rent single-family homes between 2010 and 2015, Burns estimates. That’s three of four homeowners who lose homes to foreclosure or other mortgage distress. The single-family home rental was the fastest-growing part of the rental market from 2005 to 2010, Fannie Mae says, citing U.S. Census data. Its continued growth is “unprecedented,” Burns adds.

“In the next five to 10 years, you’ll see tens of billions, if not hundreds of billions, of dollars of private equity” pouring into the single-family rental business, says Justin Chang, principal of investment firm Colony Capital.

In the past six months, Colony has bought more than 1,000 homes to turn into rentals. Most are in Arizona, California and Nevada, though Colony expects to expand into Texas, Georgia and Florida. In the next year, it will invest at least $1.5 billion in single-family rentals, Chang says.

Making a home, but not as an owner

The new tenants are “a family, two kids, a dog and a fish bowl,” says Gregor Watson, managing director of 643 Capital Management, which has 400 single-family rentals, most in the San Francisco Bay Area.

The Jacobsons’ neighborhood of 484 homes — known as The Arbors in Gilbert — typifies the trend. About 38% of the homes appear to be rentals. That’s twice the percentage of the entire 3,900-home Power Ranch subdivision, says Stephanie Fee, manager of the Power Ranch Community Association. She says the number of rentals in The Arbors has grown. “The neighborhood has kind of turned,” she says.

Homes in The Arbors — mostly two-story stuccos spaced a few feet apart — were built less than a decade ago. Some were initially purchased as rentals, but most attracted first-time buyers, Fee says. Their values climbed with the housing bubble, then fell when it popped.

Since 2008, eight of 40 homes on Jacobsons’ street went through foreclosure, according to data from ForeclosureRadar. Public records indicate four appear to be rentals, because property tax bills go to different addresses. Other nearby homes have also become rentals in recent years, homeowners say.

“These used to be all owner-occupied,” says Daniel Vandenberg, 28, an environmental consultant who bought his house in 2007 and lives on the same street as the Jacobsons. Most houses near him are now rentals, he says.

Vandenberg says the street “still looks nice” and is in better shape than a few years ago when more homes were vacant. The homeowners’ association maintains much of the neighborhood, including its parks, community pools, lakes and playgrounds. Trash bins can’t be out for more than 24 hours. Cars can’t be parked on streets overnight.

Yet, the combination of rentals and declining home values have taken a toll on The Arbors’ appearance, other homeowners say. On a recent Friday night, a home that neighbors said was a rental sat vacant. Its garage door hung crooked and part-way open. Empty moving boxes and debris were stacked out front.

Michelle House, who bought her Arbors home in 2009 for $163,000, says she’s now surrounded by rentals and people she no longer knows. She often picks weeds left in yards.

While the community is still “nice,” it’s not the owner-occupied neighborhood she thought she’d bought into. She also worries that rentals will harm home values.

Some cities have recently taken steps to limit the spread of rentals, fearing the same thing.

The city of West St. Paul, Minn., recently adopted a law limiting single-family home rentals to 10% of homes on a block. If blocks already had more than that, they were grandfathered in.

“Neighbors were complaining the homes weren’t kept up,” says Jim Hartshorn, community development director of West St. Paul, population 19,800. He says the city was hard-hit with foreclosures and has a lot of rentals.

Mankato and Northfield, Minn., also passed block rental limits in recent years. Another Minnesota college town, Winona, did so in 2005.

The Minnesota limits are at the “leading edge” of efforts that could grow given the foreclosure crisis, says Anthony Sanders, of the Institute for Justice, a non-profit public interest law firm. It’s representing Winona homeowners in a lawsuit against the limits. “There’s just a fundamental right to be able to rent out your property,” Sanders says.

Even some home builders are wary about too many rentals. Blandford Homes, which builds and sells new homes in Power Ranch, recently stopped selling to investors, given ample demand from regular homeowners, says Blandford sales manager Jerry Lilly.

“You just don’t want a neighborhood full of rentals,” he says.

Preliminary data from a study of home values in the late 1980s and early 1990s show that they decline slightly as rentals increase, says Edward Coulson, a Penn State University economist who is doing the independent study. A decade ago, he did a similar study, paid for by the Fannie Mae Foundation. It found that a 10% increase in a neighborhood’s ownership rate led to an approximate 3.6% rise in home values.

In some cases, investor-owned rentals could help neighborhoods, says Paul Willen, a senior economist in the Federal Reserve Bank of Boston. In lower-income areas, for example, such owners might have more money to maintain homes than other owners can.

He says the growth of big-time investors in the single-family rental market is a “transitory thing” because it’s more expensive to manage them than multi-family housing.

“The end game for investors is to sell these homes profitably in three to five years, to owners,” Willen says.

Burns expects that 70% of those who lose homes to mortgage distress will own again. A recent Harris Interactive survey, commissioned by Coldwell Banker, found that 83% of renters want to own a home.

In the meantime, the growth of single-family home rentals will reverberate through communities and the economy.

The rentals can mean shifting student populations that present more challenges for schools, says Roger Freeman, superintendent of the Littleton Elementary School District in Avondale, Ariz., which is also in the Phoenix region.

Half of his district’s 5,000 students are new this year, a far higher percentage than normal. Foreclosures are part of the reason, he says.

“Everything slows down,” when new students enter a classroom, Freeman says. Parents are less likely to be involved in schools if they’re not sure they’ll be there for long, he says.

The move toward a “rentership society” is bad for home builders, says a report fromMorgan Stanley, but it’s good for home furnishing retailers. People buy furnishings when they move, whether they rent or buy, the report says.

More renters will present opportunities for other companies, says a study from the Demand Institute, which studies consumers. Without mortgages to pay, they may have more money to invest. That will affect financial-services firms, the study says. Tenants may need to rent storage space, should their rental homes be smaller than ones they owned. Home improvement retailers will benefit as investor-owners repair homes to rent. Demand for renters’ insurance will rise, the study adds.

The new tenants in The Arbors have already changed their spending.

The home sat on a quarter-acre lot. It was an “oasis with 18 palms,” says Jessica Pierce, 37, a career consultant. The couple enjoyed dinner parties with their previous neighbors. “Our kids knew each other,” Pierce says.

Now, the couple rent a smaller home. Their next-door neighbors, whom Pierce doesn’t know by name, can peer into her backyard from their second story.

As Pierce sits at her kitchen table, she points out the broken tile on the kitchen floor. She hasn’t been inspired to get the landlord, who lives in New Jersey, to fix it. The couple don’t spend money on plants, new carpet, fresh paint, new tile — as they would if they owned the home, Pierce says.

They’re also socking away money for a down payment. Given a $1,000 rental payment vs. a $3,000 a month mortgage, they can do that. Pierce says she’s counting the days until they can buy.

“I just feel like I’m in someone else’s home,” she says.

The Jacobsons aren’t so wistful about home ownership.

For the past 19 months, they’ve rented in The Arbors. Their home is neat and clean, their furnishings are fashionable. Yet, their backyard is 200 square feet of dirt and weeds, just as it was when they moved in. They keep the shades drawn.

Instead of paying $2,100 on a monthly mortgage payment, they pay $1,243.38 to rent. Instead of spending weekends fixing up their home, they go to an occasional jazz club.

“I guess that was fun,” says Jodi Jacobson, 38, when recalling the weekends spent at their former home. “But do we have any vacation memories from that time? No.” Since their foreclosure, they’ve taken one vacation. They expect to take more.

If they ever buy a home again, they say they’ll buy something smaller. “I would never put so much of my income again into a house,” Steve Jacobson says.